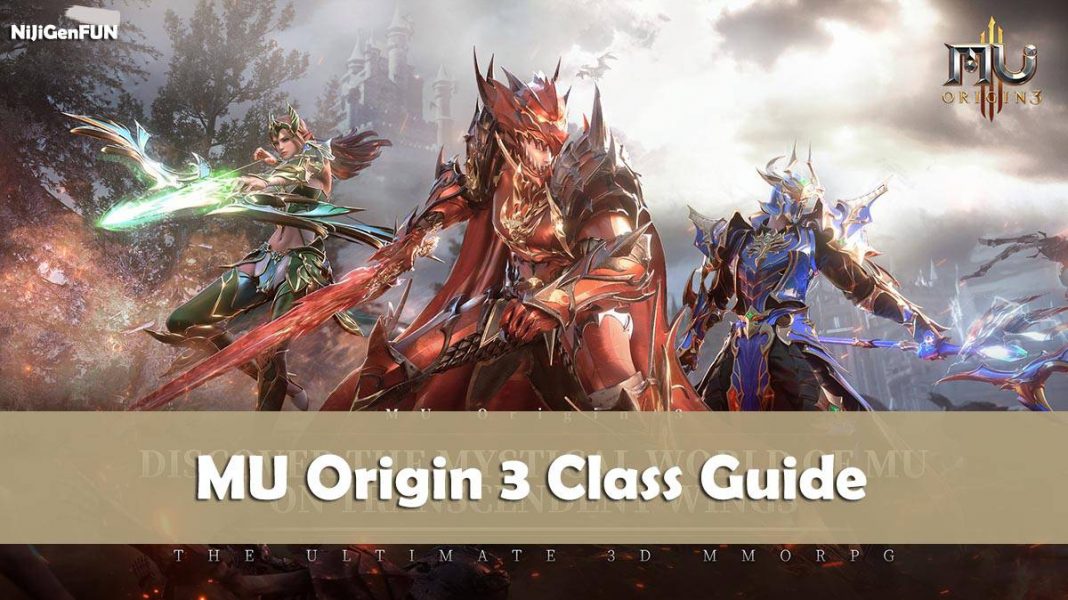 “MU Origin 3 Global” is set to launch later this month, we’ll provide the relevant information & guide on the initial 3 classes (Swordsman, Mage, and Archer) available at launch, and the 6 subclasses (Fighter, Knight, Magister, Forbidden Mage, Holy Archer, and Ranger) they can progress into as you complete the required quests and reach P4.

The Swordsman is the tank profession in “MU Origin 3”, he is the king of melee combat that is proficient in both offense and defense. He has skilled swordsmanship and powerful strength as well as high HP and high defense. The Swordsman class has the highest defense and relatively weaker attacks and has an easy learning curve. Players who like to mock monsters and stand in the front to protect their teammates from killing monsters can try this class.

The Fighter sacrificed high defense to step up his DPS, his burst & high critical damage can take out many enemies in one go. He has the characteristics of crit damage and brutal harvesting, which is very suitable for those warriors who like to charge into battle.

The Fighter has higher survivability compared to the Archer’s subclass “Ranger“, is relatively easy to use, and has a great PVP advantage.

The Knight is a standard warrior profession, his damage is much higher than that of the early stage Swordsman, and he excels in both offense and defense and shielding for damage reduction. If you like to play the role of a tank and protect teammates, or if you want high survivability in battle, then Knight is definitely for you!

The Mage can use different elemental magic to defeat the enemy depending on the setting. High spell damage is the key to defeating the opponent. Even though he has extremely high DPS, he’s extremely fragile, a typical glass cannon class, so it’s important to try and control the enemy and keep your distance because you’ll be extremely vulnerable if you let the enemy get close.

The Magister is one of the subclasses for the Mage after reaching P4. His main traits are AoE spells and continuous DMG. It’s an even more extreme version of the base Mage in terms of being a glass cannon. However, he’s very useful for daily tasks such as completing quests and clearing mobs.

The Forbidden Mage is the other subclass that the Mage can advance into after P4. He is a control-type mage, which is obviously different from the Magister. His main traits are powerful arcane magic and extreme control. For those gamers that like to control their opponents, the Forbidden Mage is definitely an excellent choice. His DPS can be comparable to that of the Magister, but his control skills can give him an edge in PVP.

The Archer is the main physical DPS in “MU Origin 3”, and obviously a long-range class, the learning curve for this class is relatively higher compared to the others. Like the Mage, she is quite fragile and needs to rely on some fancy moves to avoid damage to ensure her survival.

Compared to the Mage, the Archer can choose to sacrifice her DPS for mobility which can provide a more versatile playing style, and create more opportunities that can be advantageous in PVP.

The Holy Archer is a subclass for the Archer after reaching P4, she’s mainly a magical DPS, support, and healing class. The Holy Archer‘s DPS cannot be compared with the original Archer, she’s more suitable as a support unit in group battles.

The Ranger is the other subclass for the Archer after reaching P4, she’s an assassin-type profession. The Ranger is more mobile than the Archer, her abilities are primarily focused on DPS, she excels at taking out enemies from a distance, and she’s very suitable for gamers that like to roam and hunt.

The Ranger can focus on fragile targets such as the Mage and Magister in group battles, and quickly take them out, her advantages in PVP are second only to the Fighter.

The Symphony of Dragon and Girls – 2022.05 Tier List & Best Characters

error: Content is protected !!
We use cookies to ensure that we give you the best experience on our website. If you continue to use this site we will assume that you are happy with it.OkNo